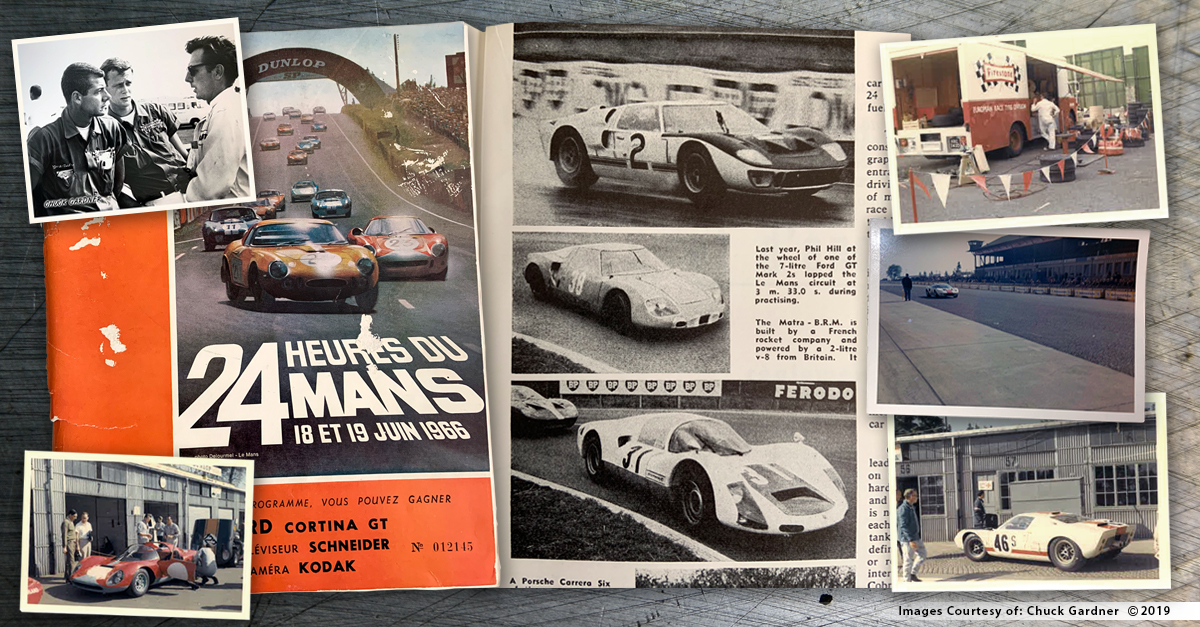 If you haven't heard by now, there is an epic movie coming out November 15th: Ford v Ferrari. This movie captures the story of one of the most historic moments in racing: a battle between two automotive titans to win the 1966 24 Hours of Le Mans. In this film, Matt Damon plays the role of Carroll Shelby and Christian Bale plays Ken Miles. So why do I want to see this movie? Well, I get to watch it with my dad, who was the Principal Compounder for Firestone, and developed the tires for some of the Ford cars at this race. As if that wasn't cool enough, Ford and Firestone tasked my dad to work with the team of Bruce McLaren and Chris Amon, who played a key role in this race.

What most people don't know is that some the Ford team's cars started on Firestone tires, but were switched to Goodyear tires during the race when it started to rain. While on the course, McLaren knew something felt wrong, so he came into the pit. The team immediately called my dad over to see what was wrong. Upon inspection, my dad realized the tires were chunking out, and that was a big problem. At this point, a decision had to be made and it wasn't a matter of winning the race, but a matter of the driver's safety. Without hesitation, my dad asked the Goodyear team to grab a set of their rain tires, and the Firestone tires were changed to Goodyear without most people ever knowing, and the driver was back on the track. At the time, this was a risky move, not only because my dad worked for Firestone, but McLaren and Amon were contracted by Firestone as well. As history would show, the team of McLaren and Amon went on to win this race, which was the first time that Ford had beaten Ferrari at Le Mans and was an amazing victory for the team, Carroll Shelby, and Henry Ford II.

After the race, on a makeshift stage of plywood and sawhorses, Henry Ford II presented McLaren and Amon with magnum bottles of champagne to celebrate this historic win. What's significant about this is that afterwards, McLaren asked my dad to take his helmet and the bottle of champagne back with him to England. In archived photos, McLaren is shown holding a helmet without a Firestone emblem on it since he won on Goodyear tires.

Once McLaren and my dad had a chance to reconnect, it was then that McLaren gave my dad his helmet to say thanks. Today we still have this helmet and it is something we will cherish forever.

Growing up my dad rarely told stories or his racing career (or maybe it was that I was just too young to know the significance.) The 1966 Le Mans race was just one story from my dad's early career, as he has many stories from Nascar, Indy, and Formula One. Each one is unique, just as amazing, and at 85 years young, he stills tells them like they were yesterday. I can't begin to tell you how proud I am of my dad. He definitely is the coolest guy I know.

Mark your calendars, fasten your seatbelts, and enjoy the ride.

Stay informed by joining our newsletter or follow us online

PopStops® are used inside residential garages only as a guide for parking. Always use caution when parking a vehicle. | © 2022 | All Rights Reserved.
Website design by Gallagher Website Design. Orlando web design.
MADE IN USA